Weddings are supposed to be fun loving and the most remembered event of one’s life. What play a major role in any wedding ceremony is traditions one has to follow. These traditions vary depending on country, place, region etc. However in some places these traditions can be so strange they may seem weird to you. Here are some such type of weird traditions all over the world.

This tradition is definitely one you wouldn’t wish for yourself. The friends, relatives of the bride will surprise her by pelting her with all kinds of things like curdled milk, dead fish, tar, spoiled food, sauces, flour and whatever they can think of. She is then tied to a tree and taken out for a night of drinking. It is believed that bride can handle anything if she can handle that. 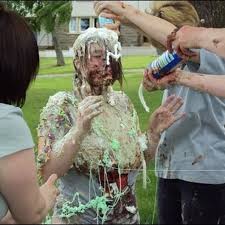 You may never believe this but this is really a weird tradition. After the completion of wedding ceremony, the bridal party would collect all of the leftovers, bits of trash, and anything else they deem to be sufficiently gross within a toilet bowl and then barge into the couple’s room. They would not leave until the couple drank it. This is supposed to give the couple fuel to have a great night ahead. 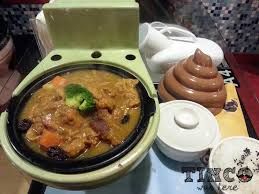 The father of the bride is supposed to spit water on her head and chest and to bless her by doing so. After that she will leave with her husband and doesn’t look back as for her fear of turning into a stone.

Fat farms : Mauritania
In Mauritania, girls of age between five and 15 are sent to “fat farms” before their wedding to pile on the pounds. If a bride had stomach rolls, stretch marks and overlapping thighs, it signals that her husband was wealthy enough to keep her satisfied.

This may amuse you because whenever either the bride or groom leaves their table to use the washroom the other gets kissed a lot.

For selecting their wedding date the bride and groom are required to take the life of a baby chick while holding the knife together. The date is then divined by the good appearance of the chick’s liver. If the liver has an unfortunate appearance, they must keep killing chicks until they find a satisfactory one.

In parts of India women born as Mangliks, an astrological combination when Mars and Saturn are both under the 7th house, are apparently “cursed” and thought to be likely to cause their husband an early death. In order to counter that curse, they must first be married to a tree and the tree must be cut down to break the curse. 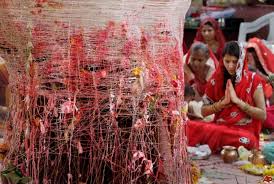 These are considered seriously as part of wedding traditions and are sincerely followed. Apart from these there are many weird wedding traditions over the world that you may not heard of while it may seem fun to us they think of those as serious as their lives.